Monk Montgomery(Chisa 806)-"Bass Odyssey"-LP. Some tracks include-Journey To The Bottom,Personage,Sister Lena plus more!The oldest of the three Montgomery brothers, Monk Montgomery has the distinction of being the first significant jazz electric bassist, starting on the instrument in 1953. He actually did not start playing bass until he was already 30, but was soon strong enough to play with Lionel Hampton's Orchestra (1951-1953). He played in the Montgomery-Johnson Quintet in Indianapolis with his brothers Wes and Buddy (along with tenor saxophonist Alonzo Johnson and drummer Robert Johnson) during 1955-1956. Monk moved to Seattle, was joined by Buddy, and they formed the Mastersounds, a popular quartet (1957-1960). He played occasionally with his brothers in the 1960s (including a short-lived group called the Montgomery Brothers), freelanced, was with Cal Tjader in 1966, and, in 1970, settled in Las Vegas. Montgomery played locally (including with Red Norvo's trio during 1970-1972), was a disc jockey, and led obscure sessions for the Chisa (1971) and Philadelphia International (1974) labels. During his last years, he was active as the founder of the Las Vegas Jazz Society.The LP has been autographed on the front cover by Monk Montgomery...........CONDITION OF VINYL,COVER AND AUTOGRAPH IS VG PLUS. 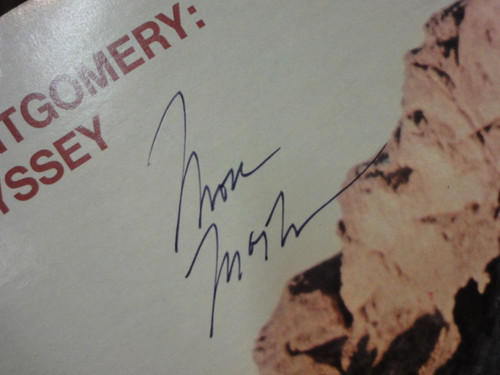