This item is a 10" X 15" color lithograph photo of Mandy Moore,Victoria Beckham and Kate Beckinsale.Amanda Leigh "Mandy" Moore (born April 10, 1984) is an American singer-songwriter, actress and fashion designer. Moore became famous as a teenager in the late 1990s, after the release of her teen pop albums So Real, I Wanna Be with You, and Mandy Moore. In 2007, she took an adult pop-folk direction with the release of Wild Hope. Her most recent album, Amanda Leigh, was released on May 26, 2009. Moore has sold more than 10 million records worldwide. Moore subsequently branched out into film, starring in 2002's A Walk to Remember and later in other movies, such as Chasing Liberty, Saved! and License to Wed......Kathryn Bailey "Kate" Beckinsale (born 26 July 1973) is an English actress. After some minor television roles, she made her film debut in Much Ado About Nothing (1993), filmed while she was a student at Oxford University. She then appeared in British costume dramas such as Prince of Jutland (1994), Cold Comfort Farm (1995), Emma (1996) and The Golden Bowl (2000), in addition to various stage and radio productions. She began to seek film work in the United States in the late 1990s and, after appearing in small-scale dramas The Last Days of Disco (1998) and Brokedown Palace (1999), she had a breakout year in 2001 with starring roles in war epic Pearl Harbor and romantic comedy Serendipity. She built on this success with appearances in The Aviator (2004) and Click (2006). The lithograph photo has been autographed on the front by Mandy Moore.Victoria Beckham and Kate Beckinsale............BOTH PHOTO AND AUTOGRAPHS ARE IN VERY GOOD CONDITION. 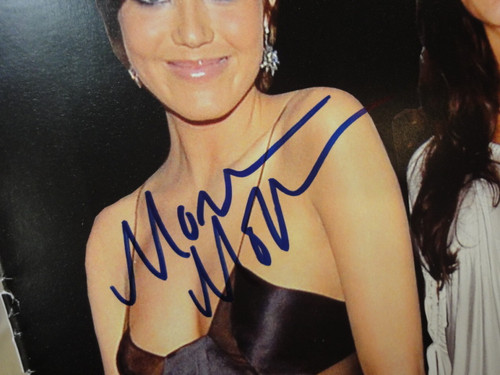