Ebony Magazine-May 1981-162 pages. This vintage Ebony Magazine features a color cover photo of actor Greg Morris plus an article with photos.Fans of the original action /espionage series Mission Impossible (1966-70) may recognize black actor Greg Morris for playing electronics wizard Barney Collier. Morris spent most of his career on television, appearing on such shows as Ben Casey, The Dick Van Dyck Show and The Twilight Zone. During the 1970s, Morris was a regular on Vega$ (1978-81), playing police officer Lt. David Neslon. A native of Cleveland who spent part of his childhood in New York City, his mother worked as a secretary for black labor leader A. Phillip Reynolds. Before becoming a television actor during the early '60s, Morris attended Ohio State University and the University of Iowa. Morris passed away at the age of 61 on August 27, 1996. The cause of death was unreported. The magazine has been autographed on the front cover by Greg Morris.....BOTH MAGAZINE AND AUTOGRAPH ARE IN VERY GOOD CONDITION. 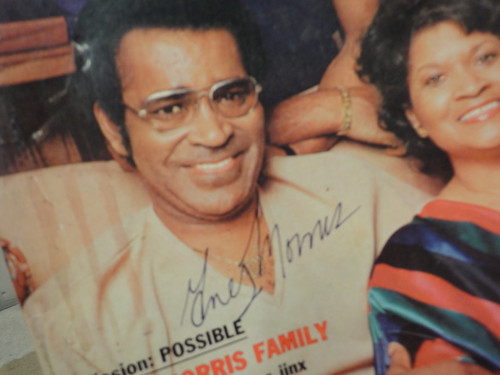