This item is an 8" X 10",black and white photo of actor George Montgomery in a Western Movie Scene.Strappingly handsome Geo Montgomery was the son of a Russian immigrant who settled in the American Northwest. Montgomery attended University of Washington, intending to make a career of interior decorating, but his athletic prowess sidetracked him into a film career. Billed as George Letz, he starred in the 1939 serial The Lone Ranger as one of the five men suspected of being the Masked Man. When 20th Century Fox decided to inaugurate a B-Western series in the 1940s, they hired George Montgomery (as he was then known) for that purpose. The Western series fell by the wayside, but Montgomery was retained by Fox for romantic leading roles, including a courageous but unsuccessful try at Raymond Chandler's urban p.i. Philip Marlowe in 1947's The Brasher Doubloon. Montgomery returned to Westerns at Columbia in the 1950s, and was equipped with Stetson, six-gun, and steed on the 1958 TV series Cimarron City. In the early '60s, Montgomery enjoyed fair success as producer/director of several inexpensive Philippine-based actioners. He was married for 19 years to singer Dinah Shore; they remained friendly long after the divorce, with Montgomery frequently showing up as a guest star on Dinah's TV talkfest of the 1970s. By that time, however, George Montgomery was an actor no more, but a highly successful furniture designer. The photo has been autographed on the front by George Montgomery with a fountain pen in blue............BOTH PHOTO AND AUTOGRAPH ARE IN VERY GOOD CONDITION......... 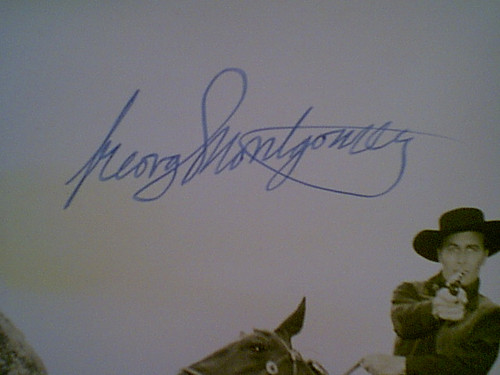