Rolling Stone Magazine-March 31, 1983-Issue No. 392-60 pages. This vintage Rolling Stone-which originally sold for $1.50-features a color cover photo of Dudley Moore plus an article with photos.Dudley Moore joined Peter Cook, Alan Bennett and Jonathan Miller in the groundbreaking comedy revue Beyond The Fringe. (The group's offbeat satire set the stage for a later British comedy troupe, Monty Python's Flying Circus.) Moore was an accomplished pianist who toured as a jazz musician before joining Beyond The Fringe; he often used the instrument in his comedy routines. Cook and Moore (also known as Pete and Dud) later co-starred in the sketch comedy TV show Not Only... But Also and the 1967 film Bedazzled. Moore starred in the hit 1979 film 10 where his diminutive size (he stood 5'2") made him a perfect comic foil for the statuesque love interest, Bo Derek. Moore was nominated for an Oscar for his work in the 1981 romantic comedy Arthur (with Liza Minnelli). In 1999 he announced that he was suffering from a rare degenerative disease known as progressive supranuclear palsy. (He ultimately died of pneumonia related to the disease.) Moore was awarded a CBE by Queen Elizabeth II in November of 2001. The Rolling Stone has been autographed on the front cover by Dudley Moore..................BOTH ROLLING STONE AND AUTOGRAPH ARE IN VERY GOOD CONDITION. 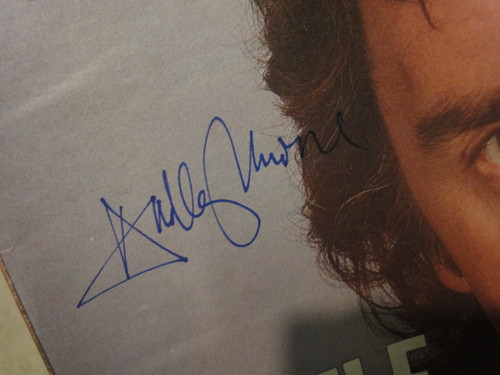