This item is a 5" X 7", early fan club photo of actor Tom Mix. Thomas Edwin Mix (born Thomas Hezikiah Mix; January 6, 1880 – October 12, 1940) was an American film actor and the star of many early Western movies between 1909 and 1935. He appeared in 291 films, all but nine of which were silent movies. He was Hollywood's first Western star and helped define the genre as it emerged in the early days of the cinema.Mix was king of the Hollywood western during the silent film era. A superb marksman and rider, he performed most of his own stunts. His flair for melodrama, outlandish cowboy costumes, nonstop action plots, and a good-sport attitude defined the movie cowboy for decades to come. His silent films include The Untamed (1920) and Riders of the Purple Sage (1925); Destry Rides Again (1932) and The Rider of Death Valley (1932) are two of his successful talkies. The fan club photo has been autographed on the front by Tom Mix in black..........BOTH PHOTO AND AUTOGRAPH ARE IN VERY GOOD CONDITION. 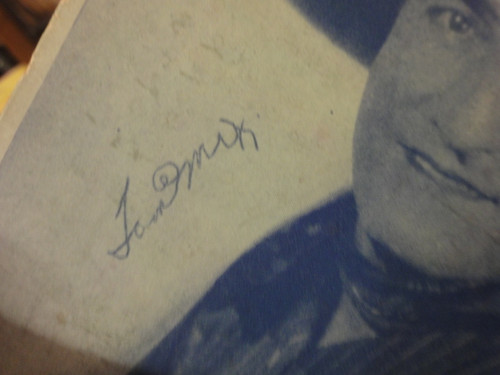