This is an authentically autographed LP by Sal Mineo... Recorded directly from the SOUNDTRACK of The Gene Krupa Story(Verve MGV 15010)Starring Sal Mineo as Gene Krupa-Featuring the DRUMS of GENE KRUPA, with ANITA O'DAY and RED NICHOLS. Photo cover is signed by Sal Mineo. Condition of the vinyl,cover, and autograph is AVERAGE. Salvatore Mineo, Jr. (January 10, 1939  February 12, 1976), better known as Sal Mineo, was an American film and theatre actor, best known for his performance opposite James Dean in the film Rebel Without a Cause 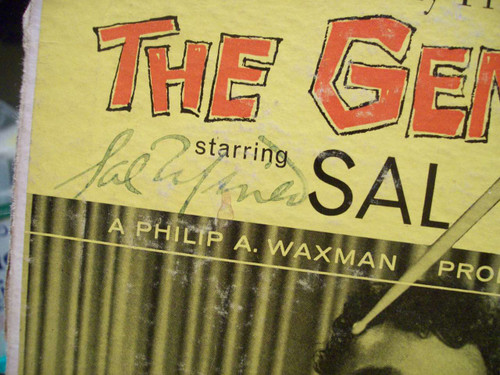