Rolling Stone Magazine/Newspaper-March 15,1973-No. 130--60 pages. This vintage Rolling Stone Magazine/Newspaper-which originally sold for sixty cents-features a color cover of actor Robert Mitchum. The magazine also features an article with photos on Robert Mitchum.Robert Charles Durman Mitchum (August 6, 1917  July 1, 1997) was an American film actor, author, composer and singer. Mitchum is largely remembered for his starring roles in several major works of the film noir style, and is considered a forerunner of the anti-heroes prevalent in film during the 1950s and 1960s. Film critic Roger Ebert has named him his favorite actor and one of the greatest actors of all time. The Rolling Stone has been autographed on the front cover by Robert Mitchum........................BOTH ROLLING STONE AND AUTOGRAPH ARE IN AVERAGE CONDITION.............. 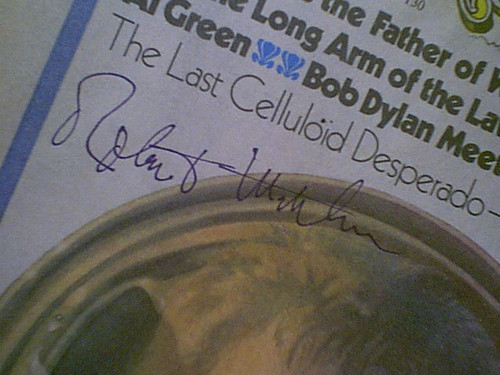