This item is an 8" X 10", black and white photo af actress Carmen Miranda. Carmen Miranda,born Maria do Carmo Miranda da Cunha, 9 February 1909 – 5 August 1955) was a Portuguese-born Brazilian samba singer, dancer, Broadway actress and film star who was active from the late 1920s onwards. Nicknamed "The Brazilian Bombshell",Miranda was known for her signature fruit hat outfit that she wore in her American films. As a young woman, she designed hats in a boutique before making her first recordings with composer Josué de Barros in 1929. Miranda's 1930 recording of "Taí (Pra Você Gostar de Mim)", written by Joubert de Carvalho, catapulted her to stardom in Brazil as the foremost interpreter of samba. The photo has been autographed by Carmen Miranda...............BOTH PHOTO AND AUTOGRAPH ARE IN EXCELLENT CONDITION. 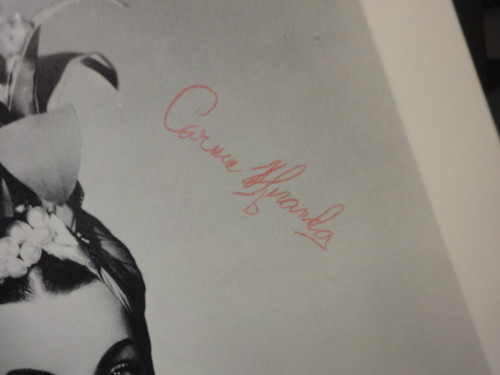