This is an authentically autographed TV Guide by Mitch Miller.. TV Guide-1962-Photo cover is signed by Mitch Miller, condition of the magazine and autograph is VERY GOOD Mitchell William "Mitch" Miller (July 4, 1911 – July 31, 2010)[1][2] was an American musician, singer, conductor, record producer, A&R man and record company executive. Miller was one of the most influential figures in American popular music during the 1950s and early 1960s, both as the head of Artists and Repertoire at Columbia Records and as a best-selling recording artist with an NBC television series, Sing Along with Mitch. A graduate of the Eastman School of Music of the University of Rochester in the early 1930s, Miller began his musical career as an accomplished player of the oboe and English horn, and recorded several highly regarded classical albums featuring his instrumental work, but he is best remembered as a conductor, choral director, television performer and recording executive. 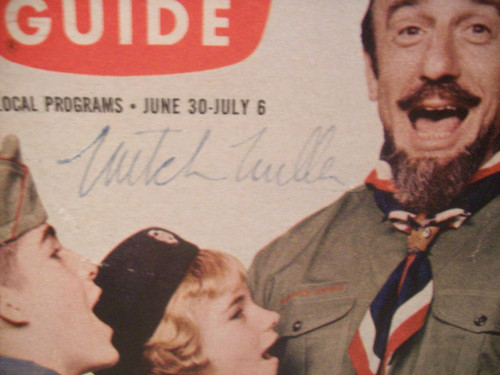