Henry Miller-"The Henry Miller Reader"-1959-New Directions-5 1/2" X 8 1/2"-Hardcover Book-With Jacket-Signed By Author.Miller, Henry, 18911980, American author, b. New York City. Miller sought to reestablish the freedom to live without the conventional restraints of civilization. His books are potpourris of sexual description, quasi-philosophical speculation, reflection on literature and society, surrealistic imaginings, and autobiographical incident. After living in Paris in the 1930s, he returned to the United States and settled in Big Sur, Calif. Miller's first two works, Tropic of Cancer (Paris, 1934) and Tropic of Capricorn (Paris, 1939), were denied publication in the U.S. until the early 1960s because of alleged obscenity. The Colossus of Maroussi (1941), a travel book of modern Greece, is considered by some critics his best work. His other writings include the Rosy Crucifixion TrilogySexus (1949), Plexus (1953), and Nexus (1960). In 1976 Norman Mailer edited a selection of Miller's writings, Genius and Lust. The book has been autographed on the title page by Henry Miller with a fountain pen in black.....BOTH BOOK AND AUTOGRAPH ARE IN VERY GOOD CONDITION.JACKET HAS WEAR................. 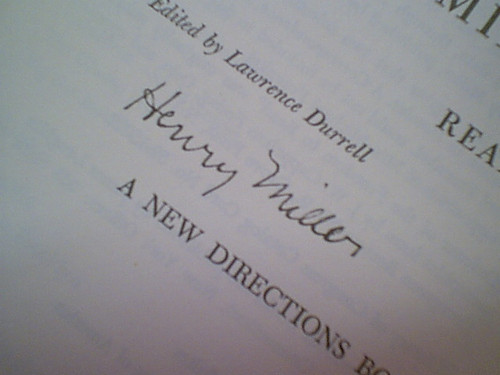