This item is a 7" X 8 1/2",black and white press/wire photo of playwright and author Arthur Miller. The photo is date March 27,1989 and comes with an original byline. The photo features Arthur Miller's newest screenplay.Arthur Asher Miller (October 17, 1915  February 10, 2005) was an American playwright and essayist. He was a prominent figure in American literature and cinema for over 61 years, writing a wide variety of plays, including celebrated plays such as The Crucible, A View from the Bridge, All My Sons, and Death of a Salesman, which are still studied[1] and performed[2] worldwide. Miller was often in the public eye, most famously for refusing to give evidence against others to the House Un-American Activities Committee, being the recipient of the Pulitzer Prize for Drama among other awards, and for marrying Marilyn Monroe. At the time of his death, Miller was considered one of the greatest American playwrights.The press/wire photo has been autographed on the front by Arthur Miller with a fountain pen in black............BOTH PHOTO AND AUTOGRAPH ARE IN VERY GOOD CONDITION......... 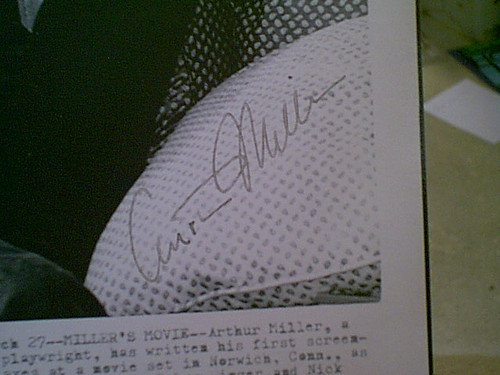