This item is a 7" X 8 1/2",black and white press/wire photo. The photo comes with a dated byline and features author Arthur Miller promoting his autobiography "Timebends: A Life" in 1987.Arthur Miller (October 17, 1915  February 10, 2005) was an American playwright and essayist. He was a prominent figure in American theatre and cinema for almost 100 years, writing a wide variety of dramas, including celebrated plays such as The Crucible, A View from the Bridge, All My Sons, and Death of a Salesman, which are studied and performed worldwide.[1] Miller was often in the public eye, most famously for refusing to give evidence against others to the House Un-American Activities Committee, being the recipient of the Pulitzer Prize for Drama among countless other awards, and for his marriage to Marilyn Monroe. Miller is considered by audiences and scholars as one of America's greatest playwrights and his plays are lauded throughout the world.The press/wire photo has been autographed on the front by Arthur Miller....BOTH PHOTO AND AUTOGRAPH ARE IN VERY GOOD CONDITION......... 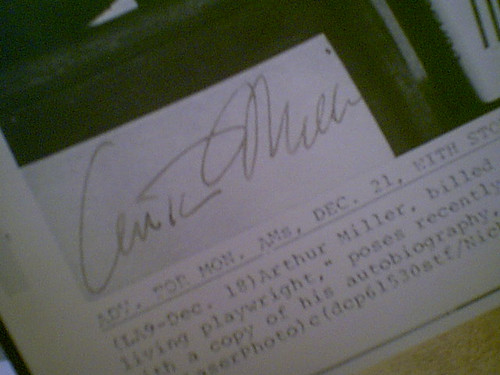