This item is a 10" X 10 1/2",black and white lithograph photo of author Arthur Miller.Playwright Arthur Miller wrote Death of a Salesman (1949) and The Crucible (1953). Miller grew up in New York City and began writing plays in the 1930s, while still a student at the University of Michigan. After graduating he returned to New York and wrote plays for the stage and for radio. Miller's plays addressed social and political issues and helped establish the American tradition of the "common man" as tragic hero. Death of a Salesman won three Tony awards and the Pulitzer Prize and made Miller internationally famous. In the 1950s Miller ran afoul of U.S. senator Joe McCarthy's House Un-American Activities Committee, and in 1957 he was convicted of contempt of Congress for refusing to name communist sympathizers (the conviction was later overturned). During his long career, Miller wrote novels, essays and short stories and was one of the most celebrated playwrights in America. He was also married to Marilyn Monroe (1956-61), for whom he wrote the screenplay to The Misfits (1961, also starring Clark Gable). His other plays include A View From the Bridge (1955), After the Fall (1964) and Broken Glass (1994).The lithograph photo has been autographed on the front by Arthur Miller..........BOTH PHOTO AND AUTOGRAPH ARE IN VERY GOOD CONDITION. 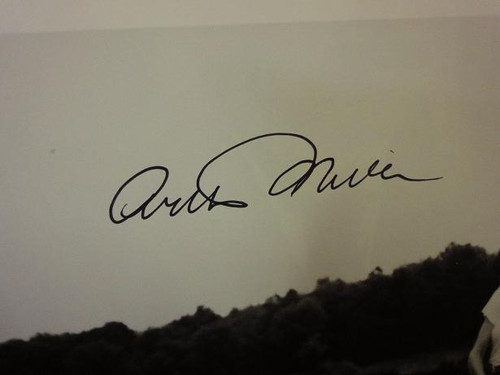