THIS IS AN AUTHENTICALLY AUTOGRAPHED LP BY VAUGHN MEADER.. BOB BOOKER AND EARLE DOUD-THE FIRST FAMILY-FEATURING VAUGHN MEADER(CADENCE CLP 3060)RELEASED IN 1962. PHOTO COVER IS SIGNED BY VAUGHN MEADER. CONDITION OF THE VINYL,COVER, AND AUTOGRAPH IS VERY GOOD. The First Family starred stand-up comedian and impersonator Vaughn Meader as Kennedy and Naomi Brossart as the First Lady. Meader's skill at impersonating Kennedy was honed on the stand-up circuitwith his New England accent naturally close to Kennedy's familiar (and often parodied) Harvard accent, he needed to adjust his voice only slightly to sound almost exactly like the President. Brossart was a theatre actress and model making her recording début.[1] The album also featured the writing and voice talent of Earle Doud, Bob Booker, Jim Lehner, Bradley Bolke, Chuck McCann, Bob McFadden, and Norma MacMillan. It was recorded in front of a live studio audience. Within weeks, many Americans could recite favorite lines from the record (including "the rubber schwan [swan] is mine," and "move ahead ... with great vigah [vigor]," the latter lampooning the President's own words). The album poked fun at Kennedy's PT-109 history; the rocking chairs he used for his painful back; the Kennedy clan's well-known athleticism, football games and family togetherness; children in the White House; and Jackie Kennedy's soft-spoken nature and her redecoration of the White House; and many other bits of knowledge that the public was eager to consume. Kennedy himself was said to have given copies of the albums as Christmas gifts, and once greeted a Democratic National Committee group by saying, "Vaughn Meader was busy tonight, so I came myself."[2] At one press conference, Kennedy was asked if the album had produced "annoyment (sic) or enjoyment." He jokingly responded, "I listened to Mr. Meader's record and, frankly, I thought it sounded more like Teddy than it did me. So, now he's annoyed."[3] The First Family album won the Grammy Award for Album of the Year in 1963. That March, Meader recorded a follow-up album, The First Family Volume 2, a combination of spoken comedy and songs performed by actors and comedians portraying members of the President's family and White House staff. 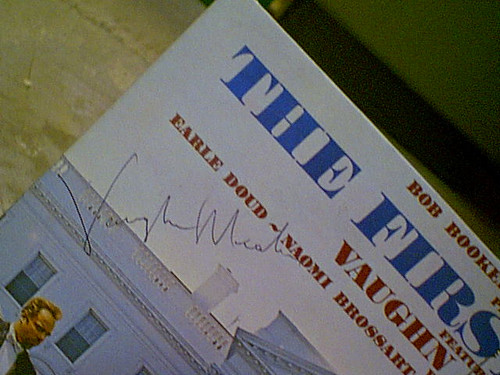