This item is a 10" X 14",color lithograph photo of filmmaker Russ Meyer. The lithograph photo has been mounted on a 10" X 14" piece of photography paper.Russell Albion Meyer (March 21, 1922  September 18, 2004), was an American motion picture director and photographer. Meyer is known primarily for writing and directing a series of successful low-budget sexploitation films that featured campy humor, sly satire and large-breasted actresses. He was filmmaker who crossed over from soft-core-porn nudie films to the mainstream with 1970's Beyond the Valley of the Dolls. His 1965 film Faster, Pussycat! Kill! Kill! was rereleased in 1995 to critical praise. The lithograph photo has been autographed on the front by Russ Meyer...BOTH PHOTO AND AUTOGRAPH ARE IN VERY GOOD CONDITION........ 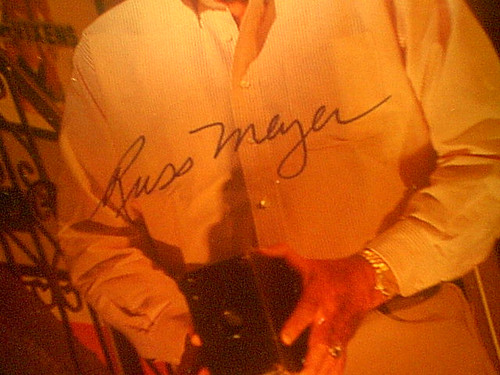