Margaret Mead-"And Keep Your Powder Dry-An Anthropologist Looks At America"-1942-William Morrow & Company-New York-5 1/2" X 8"-273 pages-hardcover book-Signed By Author.Margaret Mead wrote this comprehensive sketch of the culture of the United States -- the first since de Tocqueville -- in 1942 at the beginning of the Second World War, when Americans were confronted by foreign powers from both Europe and Asia in a particularly challenging manner. Mead's work became an instant classic. It was required reading for anthropology students for nearly two decades, and was widely translated. It was revised and expanded in 1965 for a second generation of readers. Among the more controversial conclusions of her analysis are the denial of class as a motivating force in American culture, and her contention that culture is the primary determinant for individual character formation. Her process remains lucid, vivid, and arresting. As a classic study of a complex western society, it remains a monument to anthropological analysis. The book has been autographed on the title page by Margaret Mead in blue.........BOTH BOOK AND AUTOGRAPH ARE IN NICE CONDITION.................. 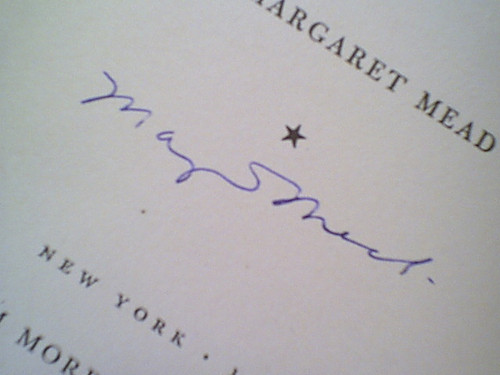