Meat Loaf-"Storytellers Tour 1999-2000"-11" X 15"-20 pages- Concert Souvenir Tour Program.Marvin Lee Aday is a singer and occasional actor who, for reasons never definitively answered, has recorded under the name Meat Loaf. In all likelihood a childhood nickname, the tag stuck, and many puns followed as the performer -- who tipped the scales at well over 300 pounds -- became one of the biggest chart acts of the 1970s before enjoying a commercial renaissance two decades later. Meat Loaf was born in Dallas, TX. The product of a family of gospel singers, he moved to Los Angeles in 1967 and formed a group known as both Meat Loaf Soul and Popcorn Blizzard. The band earned some renown through opening gigs in support of the Who, the Stooges, and Ted Nugent before Meat Loaf won a role in a West Coast production of the musical Hair. During a tour stop in Detroit, he and a fellow castmate named Stoney teamed to record the 1971 LP Stoney & Meat Loaf for Motown's Rare Earth imprint. The concert program has been autographed on the front by Meat Loaf..........BOTH CONCERT PROGRAM AND AUTOGRAPH ARE IN VERY GOOD CONDITION. 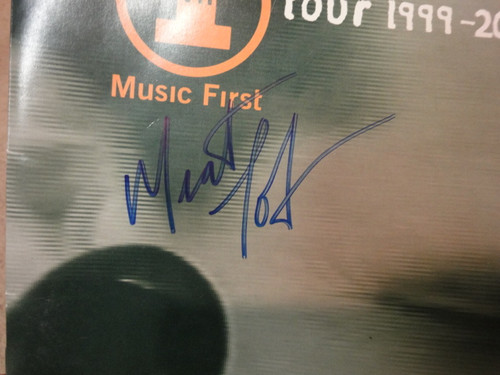