Melton, James Sheet Music Signed Autograph Carry Me Back To The Lone Prairie 1934

THIS IS AN AUTHENTICALLY AUTOGRAPHED SHEET MUSIC BY JAMES MELTON.. CARRY ME BACK TO THE LONE PRAIRIE-WRITTEN/COMPOSED BY CARSON J ROBISON-FROM WB MOVIE "STARS OVER BROADWAY-RELEASED IN 1934-PHOTO COVER IS SIGNED BY JAMES MELTON-CONDITION OF THE SHEET MUSIC AND AUTOGRAPH IS VERY GOOD. James Melton (January 2, 1904, in Moultrie, Georgia  April 21, 1961 in New York City, New York) was a popular singer in the 1920's and early 1930's who later began a career as an operatic singer when tenor voices went out of style in popular music around 1932-1935. His singing talent was similar to that of Richard Crooks, John Charles Thomas or Nelson Eddy. Melton usually catered to what has been described as a "musically middlebrow audience," emitting romantic airs and popular ballads with sugary precision. He was born in Moultrie, Georgia but was raised in Citra, Florida, where his parents grew melons and handled hogs. In 1920, he graduated from high school in Ocala, Florida and then attended a series of colleges in three different states: Florida, Georgia, and Tennessee. He received vocal instruction from Gaetano de Luca in Nashville from 1923 to 1927 before moving to New York where he studied with Beniamino Gigli's teacher, Enrico Rosati. Melton also worked in dance bands, playing saxophone in a college jazz ensemble and performing with Francis Craig's Orchestra in Atlanta in 1926. 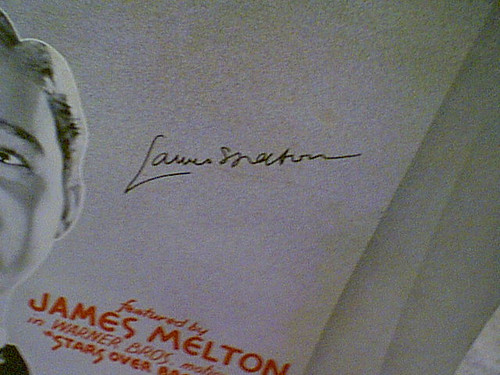 Melton, James Sheet Music Signed Autograph Carry Me Back To The Lone Prairie 1934