Trumbull White-"United States War With Spain And The History Of Cuba" 1898-International Pub-6 1/2" X 9"-559 pages-Hardcover Book With Photos-Signed Autograph -Singed By William McKinley......... William McKinley (January 29, 1843  September 14, 1901) was the 25th president of the United States, serving from 1897 until his assassination in 1901. McKinley was president during the SpanishAmerican War of 1898, raised protective tariffs to boost American industry, and rejected the expansionary monetary policy of free silver, keeping the nation on the gold standard. The book has been autographed on the first page with his photo by William McKinley with a fountain pen in brown....................BOTH BOOK AND AUTOGRAPH ARE IN VERY GOOD CONDITION. 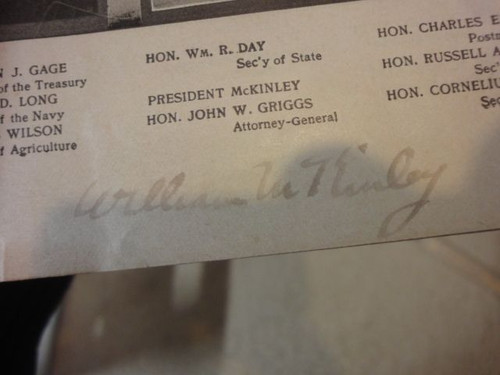