Time Magazine-May 21, 2001-8" X 10"-106 pages. This Time Magazine features a color cover photo of the Oklahoma City Bomber-Timothy McVeigh plus an article with photos.

Timothy James McVeigh (April 23, 1968 – June 11, 2001) was an American domestic terrorist responsible for the 1995 Oklahoma City bombing that killed 168 people, 19 of whom were children, and injured more than 680 others, and destroyed one third of the Alfred P. Murrah Federal Building. The bombing was the deadliest act of terrorism in the United States prior to the September 11 attacks. It remains one of the deadliest acts of domestic terrorism in U.S. history. A Gulf War veteran, McVeigh sought revenge against the federal government for the 1993 Waco siege that ended in the deaths of 82 people, many of whom were children, as well as the 1992 Ruby Ridge incident and American foreign policy. He hoped to inspire a revolution against the federal government, and defended the bombing as a legitimate tactic against what he saw as a tyrannical government. He was arrested shortly after the bombing and indicted on 160 state offenses and 11 federal offenses, including the use of a weapon of mass destruction. He was found guilty on all counts in 1997 and sentenced to death. McVeigh was executed by lethal injection on June 11, 2001, at the Federal Correctional Complex in Terre Haute, Indiana. His execution, which took place just over six years after the offense, was carried out in a considerably shorter time than most inmates awaiting the death penalty. The Time Magazine has been autographed on the front cover by Timothy McVeigh...............BOTH MAGAZINE AND AUTOGRAPH ARE IN EXCELLENT CONDITION. 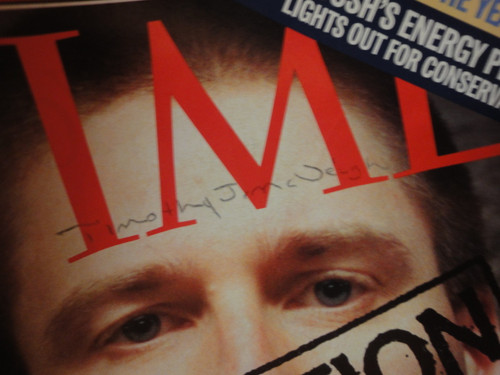