This item is an 8" X 10",black and white photo of Roddy McDowall and Elsa Lanchester in a scene from the 1943 Movie-"Lassie Come Home".This photo is from 1971 and features the movie from 1943.Female dogs tend to shed while in heat; this is why all the collies who've played doggy heroine Lassie in the movies have actually been well-disguised males. A magnificent animal named Pal was the screen's first Lassie in 1943's Lassie Come Home. Set in Yorkshire during the first World War, the film gets under way when the poverty-stricken parents (Donald Crisp, Elsa Lanchester) of young Joe Carraclough (Roddy McDowall) are forced to sell his beloved Lassie. While her new master, the duke of Rudling (Nigel Bruce), is pleasant enough, Lassie prefers the company of Joe and repeatedly escapes. Even when cared for by the duke's affectionate granddaughter, Priscilla (Elizabeth Taylor), Lassie insists upon heading back to her original home. This time, however, the trip is much longer, and Lassie must depend upon the kindness of strangers, notably farmers Dally (Dame May Whitty) and Dan'l Fadden (Ben Webster) and handyman Rowlie (Edmund Gwenn). Based on the novel by Eric Knight (originally serialized in The Saturday Evening Post), Lassie Come Home was released quite some time after Knight's death. Like all the Lassie sequels turned out by MGM between 1943 and 1951, Lassie Come Home was lensed in Technicolor. The photo has been autographed on the front by Roddy (McDowall) and Elsa Lanchester...........BOTH PHOTO AND AUTOGRAPHS ARE IN VERY GOOD CONDITION.TOP LEFT CORNER OF PHOTO HAS A SMALL CUT.............. 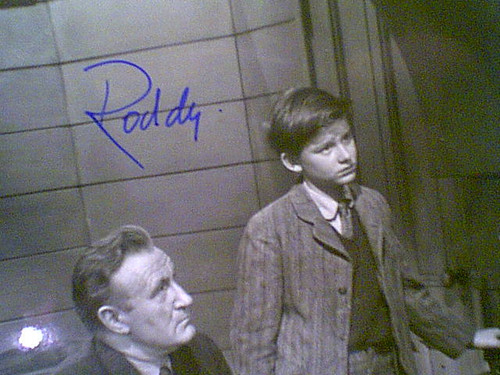