This item is a 11 1/2" X 15" page from the New York Sunday News Newspaper Magazine dated May 16,1943. Please note-this is the page only-not the complete magazine. The magazine page features a vintage color photo of a young actor-Roddy McDowall.Roddy McDowall was a child actor in the 1930s and '40s and got his big break in 1943's My Friend, Flicka. In the course of his career he appeared in hundreds of movies and television shows, including four of the five movies in the Planet of the Apes series. (He played Dr. Cornelius in the original 1968 film, co-starring with Charlton Heston.) McDowall's distinctive British voice and mischievous eyes were recognizable even beneath the chimpy makeup. Later in his career he lent his voice to a variety of cartoons, including Batman: The Animated Series and Gargoyles. The color photo has been autographed on the front by Roddy McDowall.....BOTH PHOTO AND AUTOGRAPH ARE IN AVERAGE CONDITION....................................... 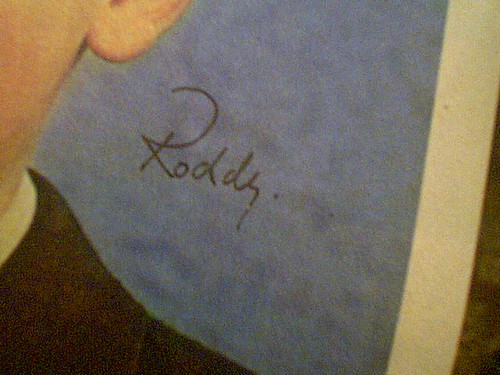