This item is a 7 1/2" X 9",black and white lithograph photo of President William McKinley. The photo was a supplement to a local vintage newpaper.William McKinley, Jr. (January 29, 1843  September 14, 1901) was the twenty-fifth President of the United States, and the last veteran of the Civil War to be elected. By the 1880s, this Ohio native was a nationally known Republican leader; his signature issue was high tariffs on imports as a formula for prosperity, as typified by his McKinley Tariff of 1890. As the Republican candidate in the 1896 presidential election, he upheld the gold standard, and promoted pluralism among ethnic groups. His campaign, designed by Mark Hanna, introduced new advertising-style campaign techniques that revolutionized campaign practices and beat back the crusading of his arch-rival, William Jennings Bryan. The 1896 election is often considered a realigning election that marked the beginning of the Progressive Era. McKinley presided over a return to prosperity after the Panic of 1893 and was reelected in 1900 after another intense campaign against Bryan, this one focused on foreign policy. As president, he fought the Spanish-American War. McKinley for months resisted the public demand for war, which was based on news of Spanish atrocities in Cuba, but was unable to get Spain to agree to implement reforms immediately. Later he annexed the Philippines, Puerto Rico, and Guam, as well as Hawaii, and set up a protectorate over Cuba. He was assassinated by Leon Czolgosz, an anarchist, and succeeded by Theodore Roosevelt.The lithograph photo has been autographed on the front by William McKinley with a fountain pen in black.....AUTOGRAPH IS IN VERY GOOD CONDITION. PHOTO IS IN USED CONDITION. 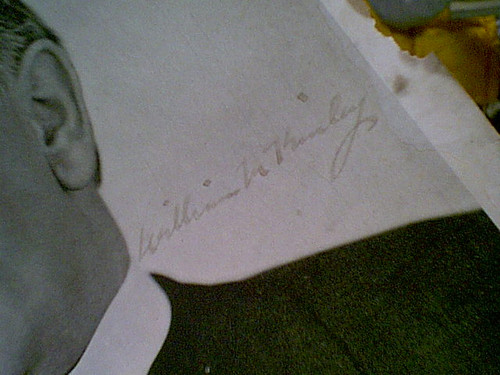