Rolling Stone Magazine/Newspaper-No. 140-August 2,1973-63 pages. This vintage Rolling Stone-which originally sold for seventy five cents-features a cover color photo of Malcolm McDowell. The Rolling Stone also features an article with photos on Malcolm McDowell.Formerly an extra for the Royal Shakespeare Company, McDowell secured stardom in the lead role of Stanley Kubrick's A Clockwork Orange (1971). His subsequent film credits include O Lucky Man! (1973), Time After Time (1979, as H. G. Wells), Caligula (1979, as the evil emperor himself), Cat People (1982), and the villain in the first Star Trek film based on its Next Generation characters, Star Trek: Generations (1997). Other film roles include My Life So Far (1999). In 1998 he recreated the role of Mr. Roarke in a revival of the television series Fantasy Island. The Rolling Stone has been autographed on the cover by Malcolm McDowell.........BOTH ROLLING STONE AND AUTOGRAPH ARE IN AVERAGE CONDITION................ 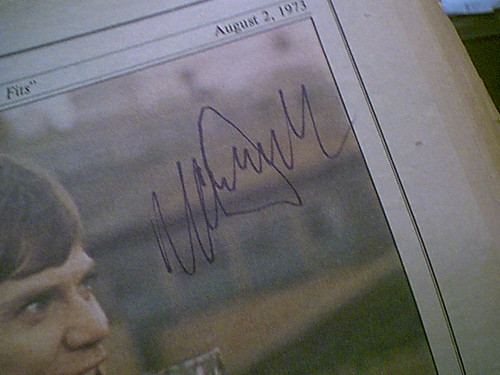