Brother Jack McDuff(Prestige 7274)-"Live!"-LP.Tracks include-Rock Candy,It Ain't Necessarily So,Sanctified Samba,Whistle While You Work,A Real Goodun,Undecided.A marvelous bandleader and organist as well as capable arranger, "Brother" Jack McDuff has one of the funkiest, most soulful styles of all time on the Hammond B-3. His rock-solid basslines and blues-drenched solos are balanced by clever, almost pianistic melodies and interesting progressions and phrases. McDuff began as a bassist playing with Denny Zeitlin and Joe Farrell. He studied privately in Cincinnati and worked with Johnny Griffin in Chicago. He taught himself organ and piano in the mid-'50s, and began gaining attention working with Willis Jackson in the late '50s and early '60s, cutting high caliber soul-jazz dates for Prestige. McDuff made his recording debut as a leader for Prestige in 1960, playing in a studio pickup band with Jimmy Forrest. They made a pair of outstanding albums: Tough Duff and The Honeydripper. McDuff organized his own band the next year, featuring Harold Vick and drummer Joe Dukes. Things took off when McDuff hired a young guitarist named George Benson. They were among the most popular combos of the mid-'60s and made several excellent albums. McDuff's later groups at Atlantic and Cadet didn't equal the level of the Benson band, while later dates for Verve and Cadet were uneven, though generally good. McDuff experimented with electronic keyboards and fusion during the '70s, then in the '80s got back in the groove with the Muse session Cap'n Jack. While his health fluctuated throughout the '90s, McDuff released several discs on the Concord Jazz label before succumbing to heart failure on January 23, 2001, at the age of 74. The LP has been autographed on the back by Jack McDuff...........CONDITION OF VINYL,COVER AND AUTOGRAPH IS VG. 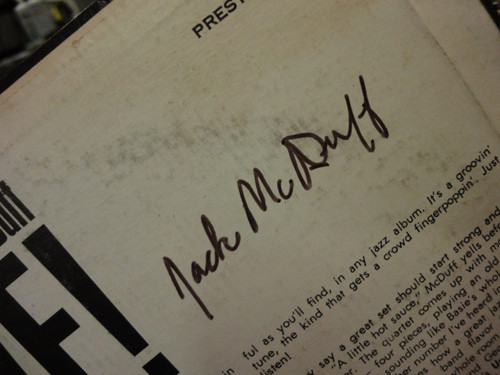