Gary McFarland(Verve V6 8632)-"The In Sound"-LP. This vintage Jazz LP was released in 1965. Tracks include-Satisfaction,Bloop Bleep,The Sting Of The Bee,Over Easy,Here I Am,I Concentrate On You,Fried Bananas,Wine And Bread,The Moment Of Truth,The Hills Of Verdugo.Largely forgotten now, Gary McFarland was one of the more significant contributors to orchestral jazz during the early '60s. An "adult prodigy," as Gene Lees accurately noted, McFarland was an ingenious composer whose music could reveal shades of complex emotional subtlety and clever childlike simplicity. While in the Army, he became interested in jazz and attempted to play trumpet, trombone, and piano. In 1955, he took up playing the vibes. Displaying a quick ability for interesting writing, he obtained a scholarship to the Berkeley School of Music. He spent one semester there and with the encouragement of pianist John Lewis, concentrated on large-band arrangements of his own compositions. He attained early notoriety and success working with Gerry Mulligan, Johnny Hodges, John Lewis, Stan Getz, Bob Brookmeyer, and Anita O'Day. McFarland began devoting more attention to his own career by 1963 when he released what is often regarded as his most significant recording, The Gary McFarland Orchestra/Special Guest Soloist: Bill Evans. He also recorded in small-group settings, which featured his clever vibes playing. The success of his instrumental pop collection, Soft Samba, allowed McFarland to form his first performing group. But his recordings thereafter, more often than not, featured an easy listening instrumental pop bent. McFarland went on to excellent work with Gabor Szabo, Shirley Scott, Zoot Sims, and Steve Kuhn, but only rarely featured his outstanding compositional talents (as in 1968's America the Beautiful).The LP features a gatefold cover with photos and liner notes.The LP has been autographed inside the gatefold cover by Gay McFarland..........CONDITION OF VINYL IS VG PLUS.CONDITION OF COVER AND AUTOGRAPH IS VG PLUS.COVER HAS A BB HOLE........................ 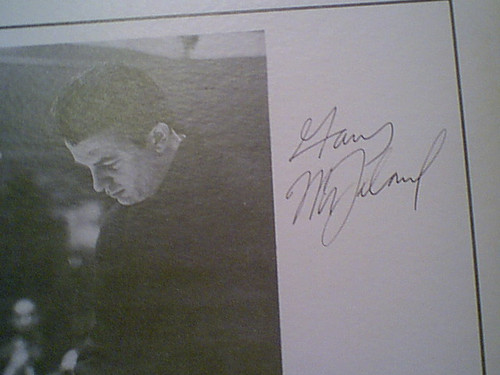