THIS IS AN AUTHENTICALLY AUTOGRAPHED LP BY GARDNER MCKAY.. ADVENTURES IN PARADISE(ABC STEREO ABCS 358)VOL 2. FEATURING:ALFRED APAKA, ROY SMECK, THE ISLANDERS, ANGEL ESPINA, TEROROTUA AND HIS TAHITIANS. FRONT COVER IS SIGNED BY GARDNER MCKAY. Adventures in Paradise was an ABC television series which ran from 1959 until 1962. It starred Gardner McKay as Adam Troy, the captain of the schooner Tiki III which sailed the South Pacific looking for passengers and adventure. Females in various stages of short skirts and swimming attire populated the screen. The show was created by James Michener. Multiple references to the schooner, Tiki (leaky Tiki), and Gardner McKay in the Jimmy Buffett song, "we are the people our parents warned us about." The Barquentine California was used as a prop in this movie. USA Network briefly aired reruns of this series between 1984 and 1988. CONDITION OF THE VINYL,COVER, AND AUTOGRAPH IS VG. 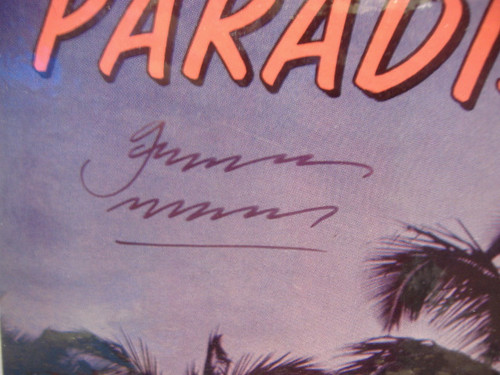