Ed McMahon-"Here's Johnny!"-2005-Rutledge Hill Press-5 1/2" X 9"-217 pages-hardcover book with jacket-with photos-First Edition-Signed By Author.Edward "Ed" Peter Leo McMahon, Jr. (born March 6, 1923) is an American comedian, game show host, announcer and television personality most famous for his work on television as Johnny Carson's announcer on Who Do You Trust? from 1957 to 1962 and on the Tonight Show, from 1962 to 1992, and as the host of the talent show Star Search, from 1983 to 1995. He later also became well-known as the presenter of American Family Publishing sweepstakes (not to be confused with Publishers Clearing House) who arrives unannounced at the homes of winners. He subsequently made a series of Neighborhood Watch Public Service Announcements reprising that role in parody. He also cohosted the Jerry Lewis Labor Day Telethon', and performed in numerous television commercials, most notably for Budweiser.For more than 30 years, McMahon introduced the Tonight Show with a drawn-out "Heeeeeeeeeeeeeeere's Johnny!" His booming voice and constant laughter earned him the nickname the Human Laugh Track. As part of the introductory patter to The Tonight Show, McMahon would state his name out loud, pronouncing it as Ed "Mc MAH yon", such as the first two syllables of "Mayonnaise" (see above "MacMahonaise" story), but neither his long-time cohort Johnny Carson nor seemingly anyone else who interviewed him ever seemed to pick up on that subtlety, usually referring to him as Ed "Mc MAN". The extroverted McMahon made a good counter to the notoriously shy Carson. Nonetheless, McMahon once told an interviewer that after his many decades as an emcee, he would still get "butterflies" in his stomach every time he would walk onto a stage.The book has been autographed on the title page by Ed McMahon in black..............BOTH BOOK AND AUTOGRAPH ARE IN EXCELLENT CONDITION.COVER HAS MINOR CREASING................ 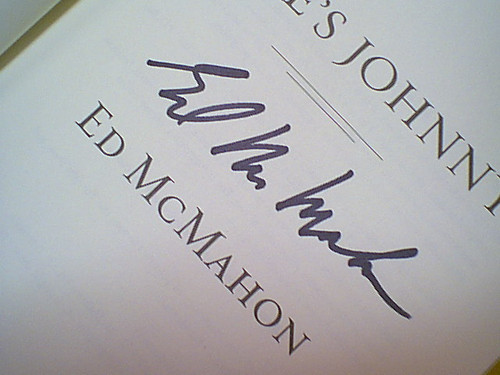