Life Magazine-February 18,1946-132 pages. This vintage Life Magazine-which originally sold for ten cents-features a full cover photo of actress Dorothy McGuire.The magazine also features a 3 page article with photos on The Movie Of The Week-"The Spiral Staircase"-starring Dorothy McGuire.American actress Dorothy McGuire made her stage debut at age 13 in A Kiss For Cinderella in her home town of Omaha, opposite fellow aspiring actor and Omaha native Henry Fonda. McGuire went to Broadway in 1938 to understudy Martha Scott in the role of Emily Webb in Our Town, eventually taking over the part; she also underwent an ingenue's ordeal by fire, acting opposite the dissipated John Barrymore in My Dear Children. Claudia, produced in 1941, was Dorothy's first starring stage vehicle. On the strength of this play, she was put under contract by film producer David O. Selznick, whose first move was to lend the actress out to 20th Century-Fox to recreate her role as the immature newlywed in the 1943 filmization of Claudia. So popular was this film that a followup was made three years later, again starring McGuire, titled Claudia and David (1946). In the meantime she had played a far more mature role as the beleagured wife of alcoholic James Dunn in A Tree Grows in Brooklyn (1945), then finally made a film for Selznick, portraying an imperiled mute girl in The Spiral Staircase (1946). Always a star and never a starlet, McGuire refused to pose for cheesecake stills, turned down attempts to publicize her private life, and vetoed wearing makeup for her role as an extremely homely woman in The Enchanted Cottage (1945), opting (wisely) to convey the homeliness through facial expressions and lighting. The actress was nominated for an Academy Award for her role as Gregory Peck's fiancee in Gentleman's Agreement (1947), but Oscars went instead to supporting actress Celeste Holm and to the picture itself. Alone among actresses her age, McGuire was able to fluctuate from romantic leads in such films as Three Coins in the Fountain (1954) to character parts in films like Friendly Persuasion (1956), relying neither on actor's affectations in the younger roles nor age makeup in the older ones. At age 46, she was still able to successfully portray the Virgin Mary in The Greatest Story Ever Told (1965). The Life Magazine has been autographed on the front by Dorothy McGuire with a fountain pen in red.......BOTH MAGAZINE AND AUTOGRAPH ARE IN VERY GOOD CONDITION......... 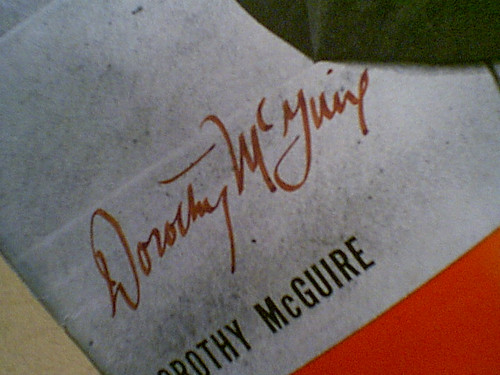