This is a vintage 8" X 10", black and white photo of Philadelphia Eagle Maxie Baughan.Maxie Callaway Baughan Jr. (born August 3, 1938) is a former American football linebacker who played in the National Football League (NFL) for the Philadelphia Eagles, Los Angeles Rams, and the Washington Redskins. Baughan played college football at Georgia Tech.  Baughan was selected in the second round of the 1960 NFL Draft by the Eagles as the 20th player chosen overall and became an immediate starter for the team at right side linebacker. Baughan played the next 10 years in the NFL and was voted all-pro seven times. At the conclusion of his rookie season, the Eagles won the 1960 NFL Championship, the last title for the franchise until their victory in Super Bowl LII over the New England Patriots. Baughan was selected to the Pro Bowl for the first of nine times that year, finishing the game with three interceptions. All told, Baughan would make the Pro Bowl five out of six years during his time with the Eagles. During a December 12, 1965 in a game against the Pittsburgh Steelers, the Eagles intercepted a team-record nine passes en route to a 47-13 win. Six of those points came courtesy of Baughan when he returned a first quarter interception by Steelers quarterback Bill Nelsen 33 yards for the lone touchdown of his NFL career. By 1966, the number of games the Eagles won had sharply declined and Baughan decided that he wanted out of Philadelphia. However, George Allen, who was entering his first season as an NFL head coach with the Los Angeles Rams, won the right to Baughan's services by sending two players (linebacker Fred Brown and defensive tackle Frank Molden ) to the Eagles in return. Baughan and Allen would develop a strong relationship, spending extensive time studying game film together. Baughan would later state that he learned more about football from Allen than anyone else.Baughan was chosen to be the Rams' defensive captain and was in charge of signal calling for the unit. He was selected for the Pro Bowl in each of his first four seasons with the Rams and was also named 1st Team All-Pro three times. After an injury-plagued 1970 season, in which he played in only 10 games, Baughan retired from the NFL. The photo has been autographed on the front by Maxie Baughan...............BOTH PHOTO AND AUTOGRAPH ARE IN VERY GOOD CONDITION. THE PHOTO HAS A ONE INCH TEAR WHICH DOES NOT AFFECT AUTOGRAPH. 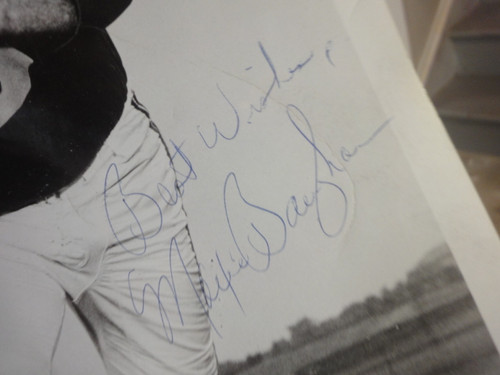