"Now That I Need You"-1949-Famous Music-sheet music. This song is featured in the 1949 Paramount Movie-"Red Hot And Blue". The movie stars Betty Hutton and Victor Mature and they are featured on the front cover in original scenes.Taken (as far as possible) from the Cole Porter musical comedy of the same name, Red, Hot and Blue stars Betty Hutton as an ambitious chorus girl. Hutton gets a job with a musical comedy bankrolled by gangsters, and is the wrong girl at the wrong place when one of the show's backers (William Talman) is bumped off. She is arrested for suspicion of murder, then is kidnapped by the villains to keep her from spilling the beans. The plot requires that she be rescued by hero Victor Mature, though many disgruntled audience members may have been rooting for the boisterous Hutton to be dumped in the East River. The stage version of Red Hot and Blue starred Ethel Merman, Jimmy Durante, and Bob Hope. Hutton is no Merman, but she gives her all to the brassy production numbers and the self-absorbed balladswritten not by Cole Porter, whose score was dispensed with, but by Paramount's in-house tunesmith Frank Loesser, who also plays a small role as one of the gangsters. The sheet music has been autographed on the front cover by Victor Mature and Betty Hutton with fountain pens in black..............BOTH SHEET MUSIC AND AUTOGRAPHS ARE IN VERY GOOD CONDITION........ 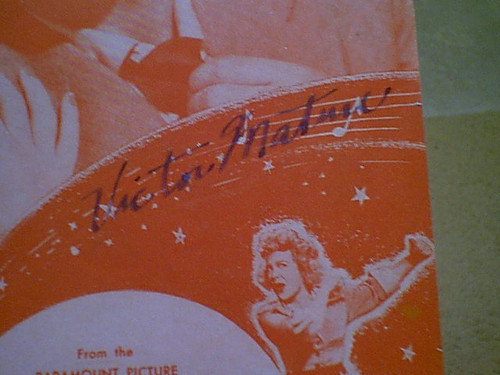