This item is an 8" X 10", b lack and white photo of actor Victor Mature. Victor John Mature (January 29, 1913 – August 4, 1999) was an American stage, film, and television actor who starred most notably in several movies during the 1950s. His best known film roles include One Million B.C. (1940), My Darling Clementine (1946), Kiss of Death (1947), Samson and Delilah (1949), and The Robe (1953). He also appeared in many musicals opposite such stars as Rita Hayworth and Betty Grable. Mature became one of Hollywood's busiest and most popular actors after the war, though rarely was he given the critical respect he often deserved. His roles in John Ford's My Darling Clementine (1946) and in Henry Hathaway's Kiss of Death (1947) were among his finest work, though he moved more and more frequently into more exotic roles in films like Samson and Delilah (1949) and The Egyptian (1954). Never an energetic actor nor one of great artistic pretensions, he nevertheless continued as a Hollywood stalwart both in programme and in more prominent films like The Robe (1953). More interested in golf than acting, his appearances diminished through the 1960s, but he made a stunning comeback of sorts in a hilarious romp as a very Victor Mature-like actor in Neil Simon's After the Fox (1966). Golf eventually took over his activities and, after a cameo as Samson's father in a TV remake of his own "Samson and Delilah" (Samson and Delilah (1984)), he retired for good. Rumors occasionally surfaced of another comeback, most notably in a never-realized remake of Red River (1948) with Sylvester Stallone, but none came to fruition. He died of cancer at his Rancho Santa Fe, California, home in 1999. The photo has been autographed by Victor Mature...................BOTH PHOTO AND AUTOGRAPH ARE IN EXCELLENT CONDITION. 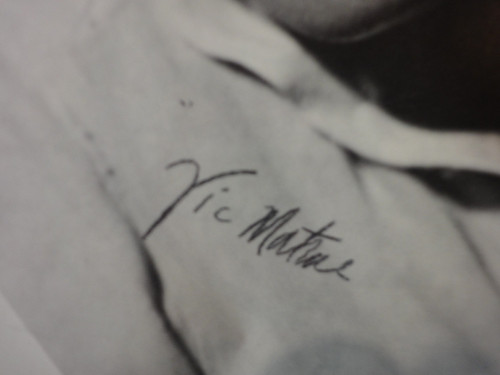