This item is an 8" X 10", black and white lithograph photo of actor Peter Mayhew as Chewbacca in a scene from the original Star Wars Movie. Peter Mayhew (born May 19, 1944) is an English actor known for playing the Wookiee Chewbacca in the Star Wars movies. His peak height was 7 feet 3 inches (2.21 m) tall.Mayhew was born in Barnes, London, England, five days after Star Wars creator George Lucas. Before getting into acting, Mayhew worked as an orderly at London's King's College Hospital.He received his first acting job in 1977 when the producers of the movie Sinbad and the Eye of the Tiger discovered Mayhew from a photograph in a newspaper article about men with large feet, and they cast him in the role of the minotaur.When casting roles for his first Star Wars film, producer George Lucas needed a tall actor who could fit the role for the beastly Chewbacca. He originally had in mind 6'6" bodybuilder David Prowse, but Prowse was instead cast to play the role of Darth Vader. This led Lucas on a search which turned up Mayhew, who says that all he had to do to be cast in the role of Chewbacca was stand up. He reprised his signature role during Star Wars Episode III: Revenge of the Sith, which was released in theatres on his birthday in 2005.Mayhew has played the part of Chewbacca in four Star Wars films: the original Star Wars trilogy (A New Hope, The Empire Strikes Back, and Return of the Jedi) and Star Wars Episode III: Revenge of the Sith. He also played the role in the 1978 television movie The Star Wars Holiday Special, as well as in an appearance on The Muppet Show and in commercials and for hospital appearances for sick children. When cast in the role he studied the movement of large animals at the zoo to come up with an authentic sense of movement for Chewbacca. When Mayhew grew ill in the shooting of The Empire Strikes Back a similarly tall stand in was used, but the actor could not match Mayhew's studied movement style and the scenes had to be reshot upon Mayhew's recovery.Mayhew did not provide the voice of Chewbacca; that was created by the film's sound designer, Ben Burtt, by mixing together the growls of different animals. The lithograph photo has been autographed on the front by Peter Mayhew......................BOTH PHOTO AND AUTOGRAPH ARE IN VERY GOOD CONDITION................... 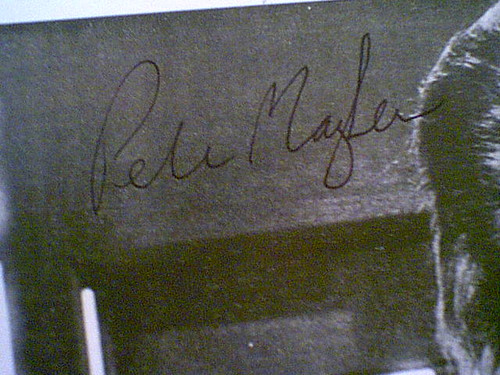