Jayne Mansfield (born Vera Jayne Palmer; April 19, 1933 – June 29, 1967) was an American actress, singer, nightclub entertainer, and Playboy Playmate. A sex symbol of the 1950s and early 1960s while under contract at 20th Century Fox, Mansfield was known for her well-publicized personal life and publicity stunts. Her film career was short-lived, but she had several box-office successes and won a Theatre World Award and a Golden Globe Award.Mansfield enjoyed success in the role of fictional actress Rita Marlowe in the Broadway play Will Success Spoil Rock Hunter? (1955–1956), which she reprised in the film adaptation of the same name (1957). Her other film roles include the musical comedy The Girl Can't Help It (1956), the drama The Wayward Bus (1957), the neo-noir Too Hot to Handle (1960), and the sex comedy Promises! Promises! (1963); the latter established Mansfield as the first major American actress to perform in a nude scene in a post-silent era film. Mansfield took her professional name from her first husband, public relations professional Paul Mansfield. She married three times, all of which ended in divorce, and had five children. She was allegedly intimately involved with numerous men, including Robert and John F. Kennedy, her attorney Samuel S. Brody, and Las Vegas entertainer Nelson Sardelli. On June 29, 1967, she died in an automobile accident in Eastern New Orleans at the age of 34. The LP has been autographed on the front cover by Jayne Mansfield...................BOTH LP AND AUTOGRAPH ARE IN EXCELLENT CONDITION. 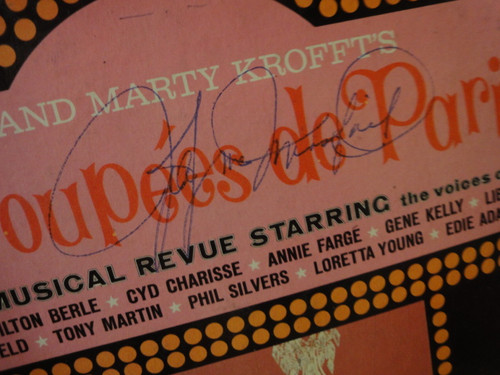