"The Sound Of Music"-1959-9" X 12"-20 pages-souvenir theatre program. This vintage souvenir theatre program features the 1959 Broadway Musical-"The Sound OF Music" starring Mary Martin and Theodore Bikel. The program is filled with photos of original scenes from the play. The souvenir program also features photos and bio on Mary Martin and Theodore Bikel with the story behind "The Sound Of Music".The Sound of Music opened on Broadway at the Lunt-Fontanne Theatre on November 16, 1959, and ran for 1,443 performances. The director was Vincent J. Donehue and the choreographer Joe Layton. The original cast included Mary Martin as Maria, Theodore Bikel as Captain Georg von Trapp, Patricia Neway as Mother Abbess, Kurt Kasznar as Max Detweiler, Marion Marlowe as Elsa Schraeder, Brian Davies as Rolfe, and Lauri Peters as Liesl. The production shared the Tony Award for Best Musical with Fiorello!. It also won for Best Actress in a Musical (Mary Martin), Best Featured Actress in a Musical (Patricia Neway), Best Scenic Design of a Musical (Oliver Smith), and Best Musical Direction. And it was nominated for Best Featured Actor in a Musical (both Theodore Bikel and Kurt Kasznar) and Best Director of a Musical (Vincent J. Donehue). The entire children's cast was nominated for Best Featured Actress category as a single nominee, even though two children were boys. The souvenir movie program has been autographed on the front cover by Mary Martin and Theodore Bikel................BOTH PROGRAM AND AUTOGRAPHS ARE IN VERY GOOD CONDITION...................... 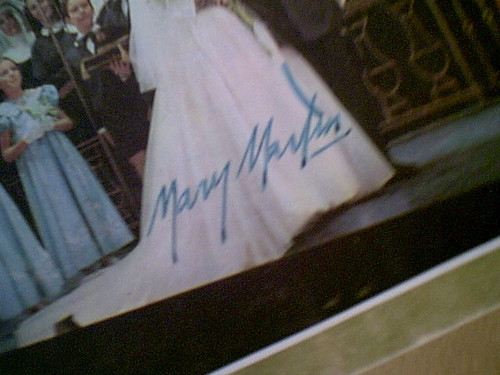