TV Guide Magazine-August 28,1976. This vintage TV Guide Magazine-which originally sold for twenty five cents-features a color cover of Lee Majors as "The Six Million Dollar Man".Please note-the article on Lee Majors is missing from the magazine.The Six Million Dollar Man is an American television series about a fictional cyborg working for the OSI (which was usually said to refer to the Office of Scientific Intelligence, but sometimes was called the Office of Scientific Investigation as well as the Office of Strategic Intelligence. The show was based on the novel Cyborg by Martin Caidin, and during pre-production, that was the proposed title of the series. It aired on the ABC network as a regular series from 1974 to 1978, following three television movies aired in 1973. The title role of Steve Austin was played by Lee Majors, who subsequently became a pop culture icon of the 1970s. A spin-off of the show was produced, The Bionic Woman, as well as several television movies featuring both eponymous characters.The TV Guide has been autographed on the front cover by Lee Majors...............BOTH MAGAZINE AND AUTOGRAPH ARE IN AVERAGE CONDITION...................... 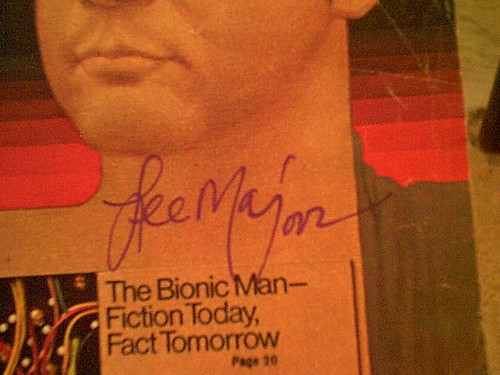