Post Magazine-SEptember 12, 1964-11" X 13"-84 pages. This vintage Saturday Evening Post Magazine-which originally sold for twenty five cents-features a color cover photo of Malcolm X plus an article with photos-"Malcolm X-His own story of crime, conversion and Black Muslims in action". Malcolm X was the passionate and controversial black activist who was assassinated in New York City in 1965. Born in Nebraska and raised in a foster home, Malcolm Little had a troubled youth that included burglary and drug dealing. At age 20 he was sent to prison near Boston for a 10-year term. While in prison, he was introduced to the teachings of Elijah Muhammad and adopted the Black Muslim faith. Upon his parole after six years in prison in 1952, Malcolm moved to Detroit and became an assistant minister at the Nation of Islam's Detroit Temple. He dropped the name Little (considered a slave name by the Nation of Islam) and became known as Malcolm X. Eventually he became a charismatic advocate of black separatism, rejecting Martin Luther King, Jr.'s policies of non-violence. Malcolm X broke with the Nation of Islam in 1964. That same year he made a pilgrimage to Mecca and shortly afterwards he embraced orthodox Islam and took the name El-Hajj Malik El-Shabazz. He recanted some of his earlier, more strident, viewpoints on race, though he remained a staunch advocate of "black power," and founded the non-sectarian Organization of Afro-American Unity (OAAU). Malcolm X was shot to death by a group of men while giving a speech in New York City in 1965; just days before his home had been firebombed. Some of the men had connections to the Nation of Islam, though a formal tie between that group and the assassination was never proven. Three men were convicted, even though one confessed and testified the other two weren't involved (or even there). The Autobiography of Malcolm X was published shortly after Malcolm's death and became a best-seller; the book was co-written by Alex Haley, later the author of Roots. The real story behind his murder remains a mystery. In 2020 New York officials announced they would re-examine the original investigation. The Post Magazine has been autographed on the front cover by Malcolm X...............BOTH MAGAZINE AND AUTOGRAPH ARE IN EXCELLENT CONDITION. 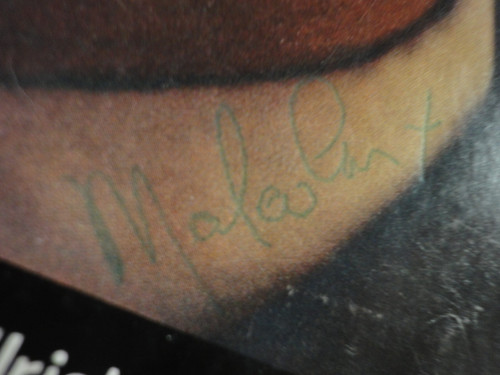