This is an authentically autographed magazine by Karl Malden.. TV Week-Sept 24 1972-Photo cover is signed by Karl Malden, condition of the magazine and autograph is VERY GOOD Karl Malden (born Mladen George Sekulovich, Serbian Cyrillic: ?????? ????? ?????????; March 22, 1912  July 1, 2009)[1][2] was an American actor. In a career that spanned more than seven decades, he featured in classic Marlon Brando films such as A Streetcar Named Desire, On the Waterfront and One-Eyed Jacks. Among other notable film roles were Archie Lee Meighan in Baby Doll, Zebulon Prescott in How the West Was Won and General Omar Bradley in Patton. His best-known role was on television as Lt. Mike Stone on the 1970s crime drama, The Streets of San Francisco. During the 1980s he was spokesman for American Express, reminding cardholders "Don't leave home without it". 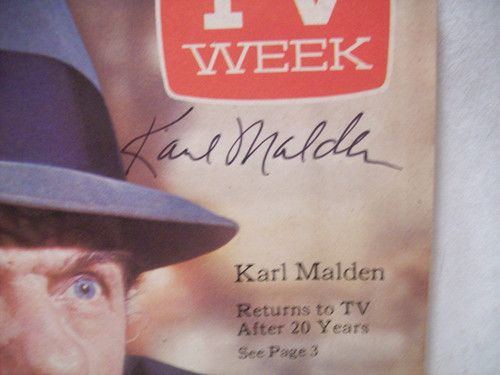