This item is an 8" X 10",black and white lithograph photo of Jock Mahoney in a scene from the 1957 Movie-"The Land Unknown". The lithograph photo has been mounted on an 8" X 10" piece of photography paper.Generous portions of The Secret Land, the 1948 documentary on the Byrd Antarctic Expedition, were worked into the action of The Land Unknown. Jock Mahoney and William Reynolds play Hal and Jack, leaders of an expedition to the South Pole. Along for the ride is girl reporter Maggie (Shawn Smith), over whose affections Hal and Jack constantly battle. Making a forced landing in the Antarctic, our intrepid explorers find that they've descended well below sea level. Before long, they are attacked by prehistoric beasts which have been preserved in this heretofore uncharted region. When not fending off Tyrannosauri and Pterodactyls, Hal, Jack, Maggie and copter pilot Steve (Phil Harvey) try to steer clear of an unwieldly carnivorous plant. Further complicating things is the presence of a long-lost, slightly demented scientist (Henry Brandon) who craves companionship...specifically the female companionship of Maggie. Its reasonably convincing special effects notwithstanding, The Land Unknown is much ado about nothing. The photo has been autographed on the front by Jock Mahoney with a fountain pen in brown............BOTH PHOTO AND AUTOGRAPH ARE IN VERY GOOD CONDITION............ 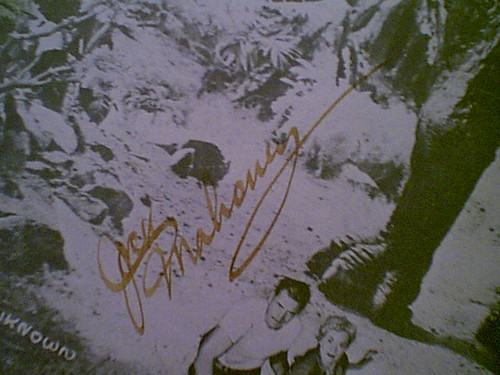