THIS IS AN AUTHENTICALLY AUTOGRAPHED PHOTO BY JOCK MAHONEY.... THIS IS A 3 1/2 INCH BY 5 1/2 INCH BLACK AND WHITE FANCLUB PHOTO CARD SIGNED BY JOCK MAHONEY. CONDITION OF THE PHOTO AND AUTOGRAPH IS VERY GOOD. Jock Mahoney (February 7, 1919  December 14, 1989) was an American actor and stuntman, who was of French, Irish and Cherokee descent. Born Jacques O'Mahoney, sometimes he was credited as Jack Mahoney, Jock O'Mahomey, Jack O'Mahoney or Jock O'Mahoney. He is perhaps best known for associations with Tarzan films in various capacities, including playing Tarzan in two movies. 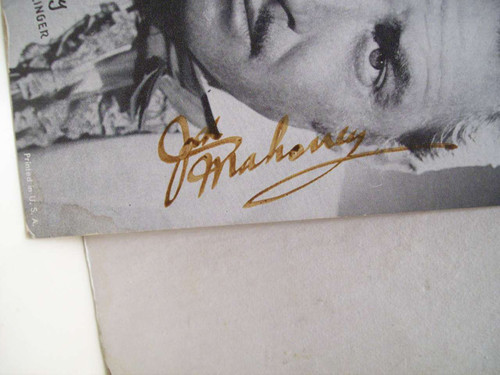