Concert Magazine-November 1973-Vol 2 No. 6-48 pages.This vintage magazine features a color cover photo of John Mayall plus an article with photos.As the elder statesman of British blues, it is John Mayall's lot to be more renowned as a bandleader and mentor than as a performer in his own right. Throughout the '60s, his band, the Bluesbreakers, acted as a finishing school for the leading British blues-rock musicians of the era. Guitarists Eric Clapton, Peter Green, and Mick Taylor joined his band in a remarkable succession in the mid-'60s, honing their chops with Mayall before going on to join Cream, Fleetwood Mac, and the Rolling Stones, respectively. John McVie and Mick Fleetwood, Jack Bruce, Aynsley Dunbar, Dick Heckstall-Smith, Andy Fraser (of Free), John Almond, and Jon Mark also played and recorded with Mayall for varying lengths of times in the '60s.The Concert Magazine has been autographed on the front cover by John Mayall............BOTH MAGAZINE AND AUTOGRAPH ARE IN VERY GOOD CONDITION. 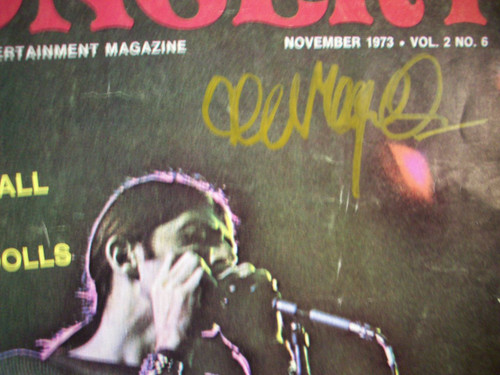