This item is a 7" X 8",black and white lithograph photo of actor Hugh Marlowe in a scene from the 1956 Movie-"The Earth Versus Flying Saucers". The lithograph photo has been mounted on a 7" X 8" piece of photography paper.Anyone who's seen the 1996 science-fiction lampoon Mars Attacks may have trouble watching Earth vs. the Flying Saucers with a straight face. Hugh Marlowe plays scientist Russell Marvin, who is on-hand when an alien spacecraft lands on earth. The saucermen at first insist that they've come in peace, but Marvin suspects otherwise. Sure enough, the visitors eventually declare their intention to take over the earth within the next 60 days, adding that the military's weapons are useless against them. The two-month window gives Marvin and his cohorts plenty of time to build-up superweapon, and thus stave off the seven-saucer invasion force. Special effects maestro Ray Harryhausen does a nice job laying waste to Washington DC in the film's memorable finale. The supporting cast of Earth vs. the Flying Saucers includes those two sci-fi flick stalwarts of the 1950s, Morris Ankrum and Thomas Browne Henry. The lithograph photo has been autographed on the front by Hugh Marlowe with a fountain pen in brown................BOTH PHOTO AND AUTOGRAPH ARE IN VERY GOOD CONDITION.............. 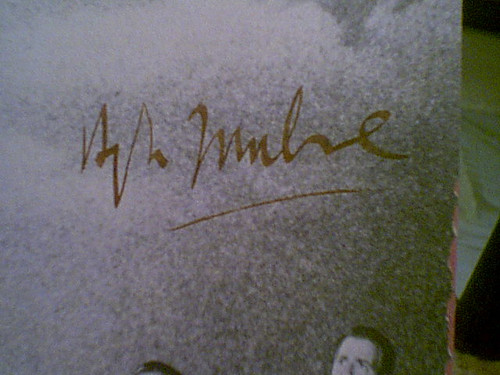