Harold Macmillan-"The Past Masters Politics And Politicians 1906-1939"-1978-Macmillan-Britain-6 1/2" X 9"-240 pages-Softcover Book-With Photos-Signed By Author.Macmillan, (Maurice) Harold, 1st earl of Stockton, 18941986, British statesman. A descendant of the founder of the publishing house of Macmillan and Company, he was educated at Eton and at Oxford and served in World War I. He entered Parliament in 1924 as a Conservative. Throughout the 1930s he was an advocate of social and economic reforms and an outspoken critic of the government's policy of appeasement. When sanctions against Italy were abandoned in 1936, he voted against his party leaders and sat for a year as an independent. He held several government posts during World War II, including minister resident in N Africa. He was minister of housing and local government (195154), minister of defense (195455), and chancellor of the exchequer (195557). In 1957 he succeeded Sir Anthony Eden as prime minister. He restored close Anglo-American relations, damaged by the Suez Canal crisis, and attempted to establish a firmer basis for East-West negotiations by making personal appeals to Moscow and Washington. He also strove for the admission of Great Britain to the European Economic Community (Common Market) but met with the opposition of French President de Gaulle. In the 1959 election, Macmillan told the country, You've never had it so good, pointing to the full employment and substantial rise in real earnings of the 1950s, and he and his party won a landslide victory. However, by 1961 balance of payments difficulties had forced the government to introduce an austerity program. Macmillan accelerated Britain's decolonization, especially in Africa. In a memorable speech to the South African parliament in 1960, he said the winds of change were sweeping across Africa. His government suffered a series of scandals; the most famous was the Profumo scandal. He resigned the prime ministership in 1963 and in 1964 retired from Parliament. Macmillan served as chancellor (196086) of the Univ. of Oxford and as chairman (196374) of the Macmillan publishing house. He accepted an earldom in 1984.The softcover book has been autographed on the title page by Harold Macmillan with a fountain pen in gray.................BOTH BOOK AND AUTOGRAPH ARE IN VERY GOOD CONDITION.................... 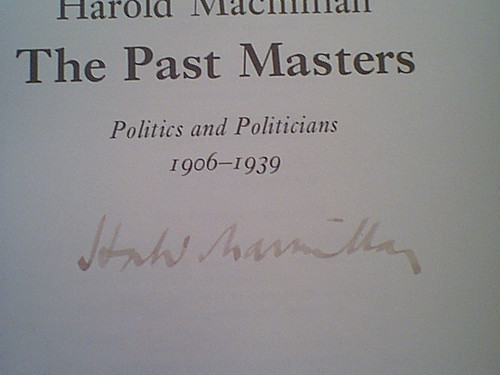