This item is an 8" X 10",black and white photo of character actor Frank Marth.Frank Marth (born July 29, 1922, New York City) is an American film and television actor. He may be best known as a cast-member of Cavalcade of Stars (1949; 19501957), especially segments of The Honeymooners, which later became a television series (195556). Marth's career ran from 1952 until 1994.Tall and fair-haired, Marth, often in tandem with the short, dark-haired George O. Petrie, played various recurring and one-time roles on The Honeymooners: one of the brutal hoods who holds the Kramdens and Ed Norton hostage after Ralph witnesses a bank robbery; Harvey Walstatter, who hires Alice Kramden to babysit his son, Harvey, Jr.; and the inquiring news photographer who lands Ralph Kramden in hot water after he quotes Kramden declaring that he is "head of the household" (prompting Ralph to try to hide the newspaper from Alice).Frank Marth later appeared on episodes of Hogan's Heroes as numerous different SS officers, The Six Million Dollar Man, and M*A*S*H as tank commander Colonel Griswald. He has been married to Hope Holiday since 1967.The photo has been autographed on the front by Frank Marth............BOTH PHOTO AND AUTOGRAPH ARE IN VERY GOOD CONDITION. 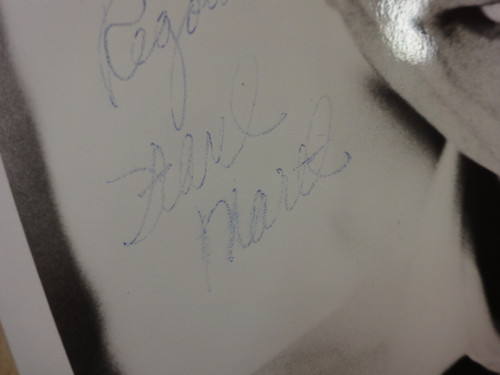