MacMurray, Fred and Sylvia Sidney "A Melody From The Sky" 1936 Sheet Music Signed Autograph "The Trail Of The Lonesome Pine"

"A Melody From The Sky"-1936-Famous Music-sheet music. This song was featured in the 1936 movie-"The Trail Of The Lonesome Pine". The Trail of the Lonesome Pine is a 1936 American romance film based on the novel of the same name. The picture was directed by Henry Hathaway starring Fred MacMurray, Sylvia Sidney, and Henry Fonda. It was the second full-length feature film to be shot in three-strip Technicolor and the first in color to be shot outdoors, with the approval of the Technicolor Corporation. Much of it was shot at Big Bear Lake in southern California. The Trail of the Lonesome Pine was the fourth feature film adaptation of John Fox Jr.'s 1908 novel, including 1916 and 1923 silent versions. As with the novel, the film makes extensive use of Appalachian English in the dialogue. The sheet music has been autographed on the front cover by Fred MacMurray with a fountain pen in black and by Miss Sylvia Sidney with a fountain pen in green. The sheet music has also been autographed on the front cover by Jean Van Sickle. Miss Van Sickle was an assistant to Sylvia Sidney in 1936.............BOTH SHEET MUSIC AND AUTOGRAPHS ARE IN VERY GOOD CONDITION........... 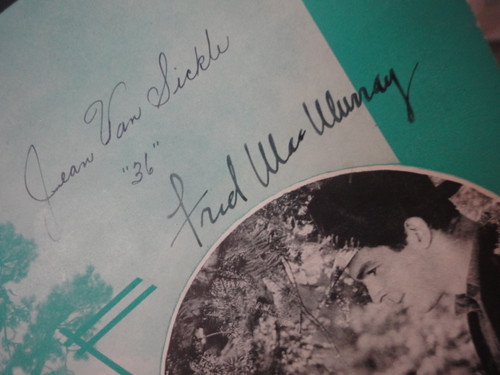 MacMurray, Fred and Sylvia Sidney "A Melody From The Sky" 1936 Sheet Music Signed Autograph "The Trail Of The Lonesome Pine"