Alistair MacLean-"Lawrence Of Arabia"-1962-Random House-5" X 8"-177 pages-Hardcover Book-With Illustrations-Signed By Author. Alistair Stuart MacLean (Scottish Gaelic: Alasdair MacGill-Eain; 21 April 1922 – 2 February 1987) was a 20th-century Scottish novelist who wrote popular thrillers and adventure stories. Many of his novels have been adapted to film, most notably The Guns of Navarone (1957) and Ice Station Zebra (1963). In the late 1960s, encouraged by film producer Elliott Kastner, MacLean began to write original screenplays, concurrently with an accompanying novel. The most successful was the first of these, the 1968 film Where Eagles Dare, which was also a bestselling novel. MacLean also published two novels under the pseudonym Ian Stuart. His books are estimated to have sold over 150 million copies, making him one of the best-selling fiction authors of all time. The book has been autographed on the title page by Alistair MacLean.........................BOTH BOOK AND AUTOGRAPH ARE IN NICE CONDITION. 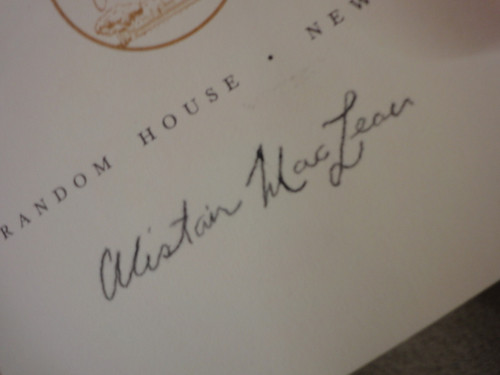