Original Soundtrack-"Sayonara"(RCA LOC 1041)-LP.Sayonara takes its own sweet time to unfold; in so doing, it permits us to make intimate acquaintance with its characters, so as to better understand their multitextured motivations. The film is set in Japan during the Korean War. While on leave, pugnacious American soldier Red Buttons falls in love with Japanese maiden Miyoshi Umeki. Given the army's official policy against interracial marriage, Buttons is courting a court-martial. His best friend, major Marlon Brando, tries to talk Buttons out of "ruining" his life. Brando himself is about to marry Patricia Owens, the daughter of general Kent Smith. Fighting back his own prejudices, Brando agrees to be Buttons' best man at the latter's wedding to Umeki. Later, Brando himself falls for Miiko Taka, a beautiful Kabuki dancer. This sparks an all-out onslaught of racial bigotry from the Army brass, and an official edict sending American soldiers back to the states without their Japanese wives. Buttons cannot bear being parted with Umeki; as a result, the two commit suicide. The tragedy compels the army to soften its attitudes towards miscegenation. Brando is reunited with Taka, who in a parallel situation has had to ward off the inbred prejudices of her people. Nominated for ten Academy Awards, Sayonara won five, including "Best Supporting Actor" (Red Buttons, whose moribund career was revitalized herein) and "Best Supporting Actress" (Miyoshi Umeki). And yes, that is Ricardo Montalban in Japanese makeup as a Kabuki actor.The LP has been autographed on the front cover by Marlon Brando with a fountain pen in black...............CONDITION OF VINYL,COVER AND AUTOGRAPH IS VG.RECORD IS IN ORIGINAL RCA INNER SLEEVE. 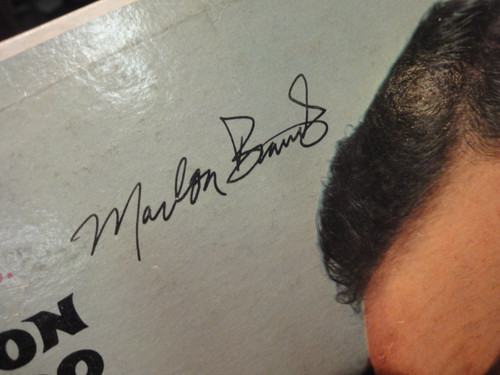