Original Soundtrack-"Love Story"(Paramount 6002)-LP. This LP features the 1970 Paramount Movie-"Love Story". The movie stars Ali MacGraw and Ryan O'Neal and they are featured on the front and back covers of the LP in original scenes.In director Arthur Hiller's hit tearjerker  based on Erich Segal's novella  Ryan O'Neal plays Oliver Barrett IV, a comfortably off Harvard pre-law student who falls in love with Radcliffe music student Jenny Cavilleri (Ali MacGraw), a freewheeling, delightfully profane product of a blue-collar Italian-American family. Oliver's father (Ray Milland) heartily disapproves of the subsequent marriage and cuts off his son's allowance. Despite financial travails (the pampered Oliver actually has to go to work!), the couple is blissfully happy....until Jenny is diagnosed as having an unnamed disease that consigns her to an early death. The movie's tagline "Love means never having to say you're sorry" became an iconic American catchphrase, the film's theme a number one hit. One of the early products of Paramount guru Robert Evans, Love Story grossed more money than any Paramount production before it. This enormously successful film inspired a 1978 sequel, Oliver's Story.The LP has been autographed on the front cover by Ali MacGraw and Ryan O'Neal..................CONDITION OF VINYL,COVER AND AUTOGRAPH IS VG.................. 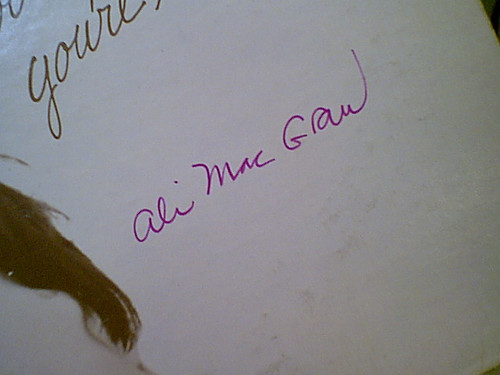