Peter Lynch-"Beating The Street"-1993-Simon & Schuster-6" X 9"-318 pages-Hardcover Book-With Jacket-With Illustrations-Signed By Author.....Peter Lynch (born January 19, 1944) is an American investor, mutual fund manager, and philanthropist. As the manager of the Magellan Fund at Fidelity Investments between 1977 and 1990, Lynch averaged a 29.2% annual return, consistently more than double the S&P 500 stock market index and making it the best-performing mutual fund in the world. During his 13-year tenure, assets under management increased from US$18 million to $14 billion. A proponent of value investing, Lynch wrote and co-authored a number of books and papers on investing strategies, including One Up on Wall Street, published by Simon & Schuster in 1989, which sold over one million copies. He coined a number of well-known mantras of modern individual investing, such as Invest in what you know and ten bagger. Lynch has been described as a "legend" by the financial media for his performance record. The book has been autographed on the title page by Peter Lynch...................BOTH BOOK AND AUTOGRAPH ARE IN VERY GOOD CONDITION. 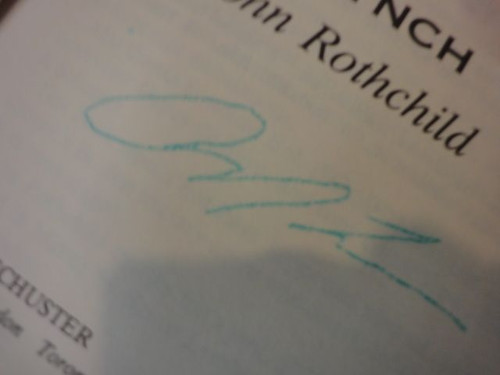